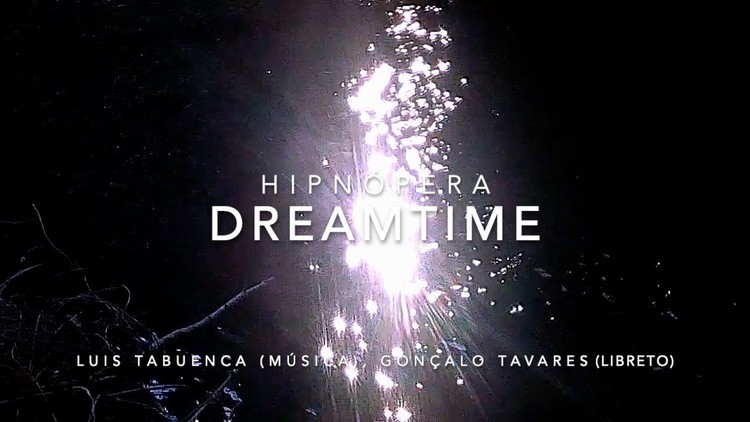 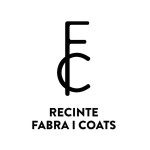 I want to collaborate and appear in the credits as a patron.

Paying 10 euros you will get back 8 euros from your tax return.

-I am committed to the project and I want to appear in the credits as a patron.

-In addition, I will attend the pre-premiere of the opera in person.

Paying 100 euros, the Treasury will return you 80 euros.

-I want to organize an online chat with the composer, with a subsequent debate.

-I am very committed to the cause and I want to appear in the credits as a patron.

Paying 250 euros, the Treasury will return you 155 euros.

TALK AND DEBATE IN PERSON

-I am an association and / or public institution and I want to organize a face-to-face talk with the composer, with subsequent debate.

-I am very committed to the cause and I want to appear in the credits as a patron.

-I am an association and / or public institution and I want to organize a face-to-face talk with the composer, with a subsequent debate.

-I am very committed to the cause and I want the logo of my organization and / or institution to appear in the credits and in the promotional material.

DREAMTIME, is a new opera-performance for para two sopranos, percussion, dance, electronic music and video. Its libretto, written by the Angolan / Portuguese poet Gonçalo Tavarés, is based on a selection of dreams of artists from different disciplines.

The work is conceived as a “hypnopera”, a transdisciplinary stage work based on the dreams of a series of people. It is the second installment of the Espejos trilogy by Luis Tabuenca. DREAMTIME aims to explore new musical-scenic dramaturgies that redefine our way of telling and telling ourselves. 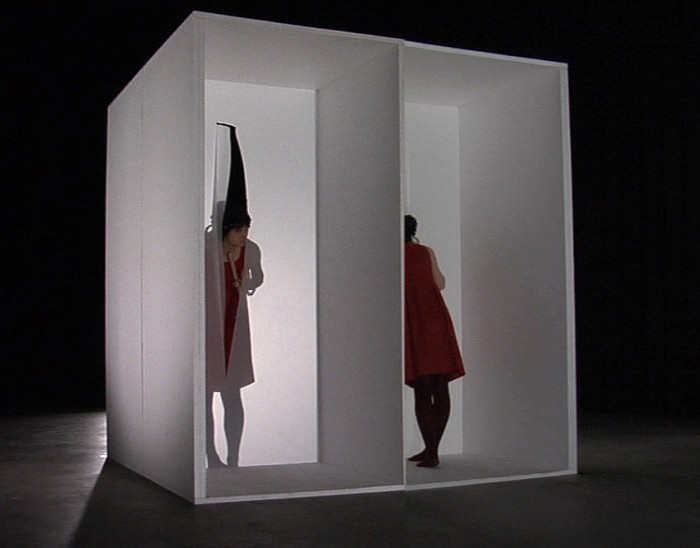 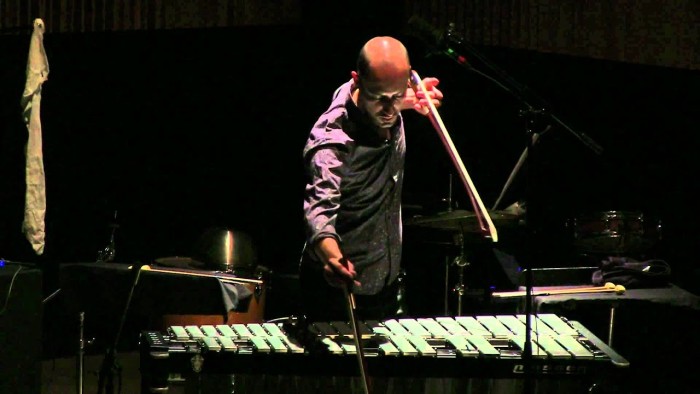 It is an innovative, inclusive and nomadic project, with artists from different backgrounds and disciplines. The creation phase is currently being developed at the Fabra i Coats Creation Factory in Barcelona.

The main objectives proposed by this project are:

• Generate ties between artists from different origins and disciplines around goals and creative experiences that drive us, and that lead us to continue generating new projects despite the difficulty of the current moment.

• Contribute to the advancement and development of contemporary performing arts, reorienting their practices towards a more dynamic form of 21st century art.

• Taking opera out of conventional spaces and auditoriums in order to create new audiences.

• Explore different aspects of music in a transdisciplinary environment, which can give rise to new musical-scenic dramaturgies arising from collaboration between artists.

• Rethink the **meaning of opera in general **and its role in our society.

• Generate original and innovative results that serve as a model of integration and interaction between the arts and the community. 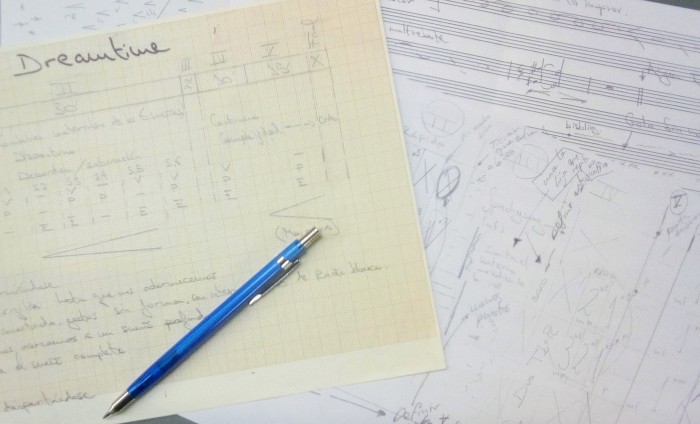 The main motivation to develop DREAMTIME is to contribute to “amplify” voices and dialogues that revolve around current creation.
We face this project by appealing to the values that have always characterized the way of acting of both Luis Tabuenca and his collaborators. These values are:

Starting from the local sphere, and understanding this as a common social space resulting from the practices and daily contacts between a diverse group, we feel that our experience with DREAMTIME will be enriched by, and will enrich, all audiences and social organizations and cultural that we strive to convene. 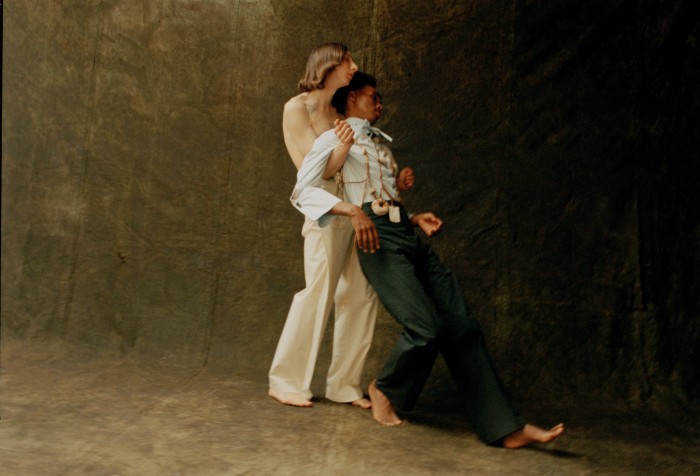 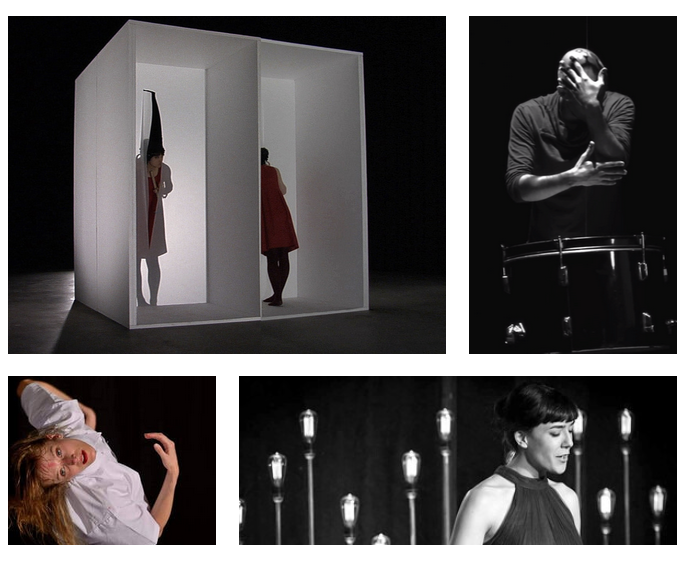 It is a team made up of 8 women and 4 men , eclectic, interdisciplinary and from different geographical and vital origins. They all have in common being great specialists in their field and a long career and experience, which we have tried to summarize as much as possible so that you know them a little more:

Luis Tabuenca: composer and percussionist. His music integrates elements from other disciplines, with compositions ranging from opera, installations, sound sculptures, expanded cinema, contemporary dance, chamber music and works just . He is famous for his extraordinary ability to mix composition and improvisation in his work. The Wire magazine stated: Luis Tabuenca's colorful music is enveloping, beautiful and immaculately sequenced. " Since 2011 he has released seven recordings that reflect his work as a composer and percussionist. He is co-founder and co-director artist of the International Festival of Experimental Music (FAT) and has been artist-in-residence at New York University, the Electroacoustic Music Festival of Portugal, at the University of Canterbury, at the Phonos Foundation and at the Fabra Creation Factory. Coats de Barcelona. Web: [https://www.luistabuenca.com/-lex.europa.eu(https://www.luistabuenca.com/)

Gonçalo Tavares: writer. He was born in Luanda, Angola. Tavares is one of the most widely translated and awarded European writers. He published his first book in 2001. Since then, translations of his work by him have been published in more than fifty countries. Tavares has received literary awards in various genres, among them the Prix du Meilleur Livre Étranger 2010 , which so far have received authors such as Robert Musil, Philip Roth, Gabriel García Márquez and Elias Canetti; the Prix Littéraire Européen 2011; and the Portugal Telecom Award in 2007 and 2011 . Other awards are the Saramago Prize, the SPA Author Prize and the Romance and Novel Grand Prize of the Portuguese Association of Writers (APE). The New Yorker stated: "Gonçalo M. Tavares is a writer that is unlike any you've read before and has a gift like Flann O'Brien, Kafka or Beckett at revealing the ways in which logic can be as faithful a servant of madness as it is of reason. "

Mariona Signes. Scenery and lighting. She studied Interior Design Projection and Direction and a Degree in Art, Design and Crafts at the Massana School . Currently, she graduated in Scenography at the Theater Institute . She has worked with companies such as Companyía Solitaria, Carla Rovira, Paloma Muñoz, Epidemia Teatre, La Minimal, Ça Marche, Agrupación Señor Serrano, among others. Within the Art Direction the outstanding works are the video clips El coro de mi gente by Macaco and Amparanoia ; "Dies que comencen" of Portobello and After Party of Anier and Shaolin Monkey. On the other hand, for the last three years she has been working in tailoring the Varekai and Totem on tour of Cirque du Soleil, as a dresser and Assistant of Head of Wardrobe. https://marionasignes.wixsite.com/designer

Noriko Koshida: video artist. Born in Tokyo, Japan. Her work hers tries to reveal the essence of the expression of the video through the realization of some kind of distortion that the camera's eyes make real. On the other hand, she is interested in creating new relationships between the body and the image. Web: [https://noriko-koshida.net/-lex.europa.eu(https://noriko-koshida.net/)

Tíscar Espadas. Spanish fashion designer and visual creator based in London. She founded her own studio in 2019, following her graduation from The Royal College of Art MA Menswear, awarded The Burberry Scholarship. Her final degree project "CHAPTER I" ends up becoming her first collection. With her, she was selected as a finalist in the BIG Design Award , Tokyo (Japan). In addition, her clothes and paintings have been exhibited in different museums and galleries in the United Kingdom, Spain and Japan, among others. The raw Spanish authenticity, the artisan eye for detail and the freedom to dress are found in every look, characterizing the design of Tíscar Espadas. The brand breathes that fashion transcends the borders of clothing and is reflected in every part of our life and personal universe. Web: https://www.tiscarespadas.com/

Vivienne H. Lake. Designer of hats, masks and accessories , she has spent more than 10 years working in exhibitions, parades and in fashion in general. She now applies these skills to many unusual projects, from hats of all shapes and sizes to masks and accessories. After completing his training in both France and the UK, he has done for Thom Browne, Galliano, Schiaparelli, Todds and Marc Jacobs while working for Stephen Jones, and has since established his own studio with projects for Studio Frith, Tolu Coker, Harris Reed, Zilver, JordanLuca ... Has been teaching at the Royal College of Art in the MA Accessories course since 2016, and at the Morley College Higher National Certificate in Millinery since 2018. Web: https://www.viviennelake.com/

Èlia Genis: choreographer and dancer . He began in classical dance formed by the * Royal Academy of Ballet , and from a very young age he expanded the concept of dance towards a multidisciplinary perspective where dance, theater and art converge, directing his interest towards creation and the living arts. It is introduced into the field of performance by the hand of choreographer Mercedes Boronat. This contact creates a personal way of approaching the scene, making creation in action, improvisation and instant composition be her main work tool, thus becoming a dancer who creates from the power of being present.

Xavi Bové: video artist . In recent years he has specialized in projection mapping, becoming artistic director of the Girona International Mapping Festival. He has participated in numerous digital arts, light and videomapping festivals around the world as a speaker, expert or jury. Bové has worked internationally in cities such as London, Berlin, New York, Singapore, Rome and Barcelona. Web: [https://vimeo.com/xavibove-lex.europa.eu(https://vimeo.com/xavibove)

Ana-María Alarcón: music researcher and sound artist . She was born in Bogotá (Colombia) and resides in Barcelona (Spain). Her research interests include questions of aesthetics, strength, space, and power. She worked as a research assistant at the Institute of Ethnomusicology (INET) of the Universidade Nova de Lisboa from 2011 to 2016. She is co-founder and coordinator of the Ethnomusicology Group of the Catalan Institute of Anthropology (ICA) . She has worked as postdoctoral researcher at the University of Barcelona (ERC ARTSOUNDSCAPES Project). As a sound artist, known under the pseudonym Anacrónica , she has presented her works in Europe, the United States and Latin America. Web: [https://etnomusicologia.wixsite.com/amaj-lex.europa.eu(https://etnomusicologia.wixsite.com/amaj)

Roberto Fratini: playwright. Born in Milan, Italy. Playwright and professor of Dance Theory at the CSD of Barcelona (Institut del Teatre). He has been a professor at the Università Statale di Pisa y Aquila. He gives workshops, master classes and conferences in various academic and theatrical entities in Spain and abroad (CCCB, Université de Lyon, ADC de Geneva, Mercat de les Flors in Barcelona, ​​Pôle Sud Strasbourg UFR Arts Strasbourg, Hochschule der Kunst de Zurich and Bern). His pieces of him have been performed at major European festivals and have won various awards.

Raúl Quilez. Sound artist and sound engineer. He has 1 Latin Grammy, 6 Latin Grammy nominations (2006-2012) and the 2015 Aragonese Music Awards for best producer. Trained at La Maîtrise de Nôtre Dame and at the Center d’Art Polyphonique in Paris . He also studied as a sound engineer at the School of Audio Engineering Institute and the Master in Electroacoustic Composition at the Katarina Gurska Higher Music Education Center. https://www.ralphkillhertz.com/ 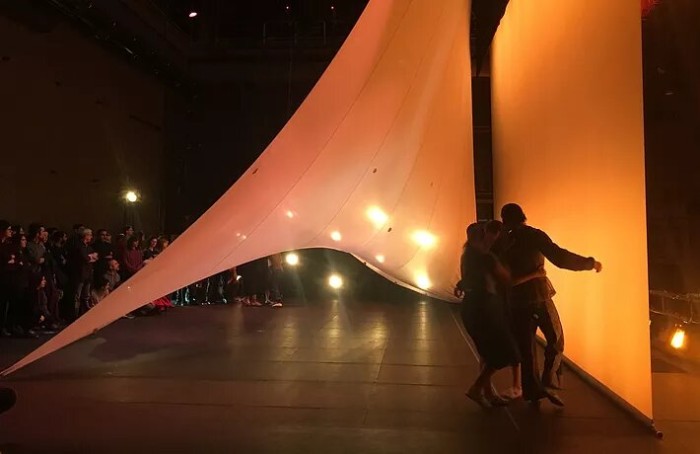 From the artistic team of DREAMTIME, we show our commitment to the objectives, the values, as well as to the social, ethical and professional considerations that govern sustainable development, to guarantee good practices, transparency, sustainability, equity, parity and diversity.
One of the most important parts of this project is to create new audiences, democratize access to opera and bring it closer to everyone, so that it is more appreciated and ceases to be an elitist genre and away from the city's residents.