We dedicate the project to you

Remember that you are making a donation. If you contribute € 5, treasury will return € 4, if you are a physical person.

We thank you for your support and we will mention you as a DONOR on the web "COMO TÚ". Remember that you are making a donation. If you contribute € 10, Treasury will return € 8 if you are a physical person.
https://www.goteo.org/calculadora-fiscal

We give you a photograph for your computer, tablet or mobile wallpaper Remember that you are making a donation. If you contribute € 20 Treasury will return €16 if you are a natural person.
https://www.goteo.org/calculadora-fiscal We give you a photograph for your computer, tablet or mobile wallpaper and an Astronomy poster. Remember that you are making a donation. If you contribute €35, Treasury will return €28 if you are a natural person.
https://www.goteo.org/calculadora-fiscal Remember that you are making a donation. If you contribute €60 Treasury will return €48 if you are a natural person
https://www.goteo.org/calculadora-fiscal

Online chat with a researcher

Thank you for your contribution to the project. To thank you, we give you a 30-minute online chat with a researcher. An appointment about science and technology, Individual or in group. Ideal for groups of friends, family or co-workers, who want to know first-hand scientific advances or who are interested in obtaining guidance on a scientific career. We have the ideal person: a scientist or technologist from our program. Remember that you are making a donation. If you contribute €60 Treasury will return €48 if you are a natural person
https://www.goteo.org/calculadora-fiscal

Online registration for the national meeting of computer science CEDI20 / 21 This year CEDI20/21 will take place from September 22nd to 24th in Malaga virtually.

All Spanish Computer Science societies are present in CEDI. So you will have the opportunity to participate in all the events and talks you are interested in.

The conference link is congresocedi.es, although it is still incomplete, since the societies have not yet selected the contributions to be published.

Remember that you are making a donation. If you contribute €100, Treasury will return €80 if you are a natural person
https://www.goteo.org/calculadora-fiscal

A workshop with the researcher of your choice

Do you want to donate a class or talk by a researcher of your choice to a school? It's possible. Choose one of the more than 70 researchers who participate in the program. Tell us the school or high school where the researcher will give the talk. We will do the rest.

Remember that you are making a donation. If you contribute €100 Treasury will return €80, if you are a natural person.
https://www.goteo.org/calculadora-fiscal

Talk or workshop + Mention on our website and in RRSS

If you are a company , you may be interested.

We thank and reward you with a talk by the researcher of your choice from our list of 70 STEAM researchers. We will also mention you on our website and on social networks.

Remember that you are making a donation. If you contribute €300 Treasury will return €105 if you are a company
https://www.goteo.org/calculadora-fiscal

If you give us your support, we will reward you with a talk or workshop by the researcher of your choice and we will also put your logo in all the events we do. We will also mention you in RRSS and we will put your logo on our COMO TÚ website so that everyone knows that you are betting heavily on us. Remember that you are making a donation. If you are a natural person and contribute €1000 Treasury will return €417.5 and if you are a company €350.
https://www.goteo.org/calculadora-fiscal

"COMO TÚ" seeks to make visible the work of women in science and technology. We believe that creating female referents in girls, boys and adolescents allows to eliminate stereotypes about the role of women in Science and Technology , overcoming the biased vision that society currently offers them.

In COMO TÚ, women scientists and technologists offer themselves to schools and institutes to give practical classes and/or talks on topics in the areas in which they are experts. We are more than 70 scientists and technologists from the fields of the so-called STEAM areas (Science, Technology, Engineering, Arts and Mathematics) such as Chemistry, Mathematics, Physics, Biology, Computer Science, Telecommunication Engineering, Chemical Engineering, Geology and Architecture. 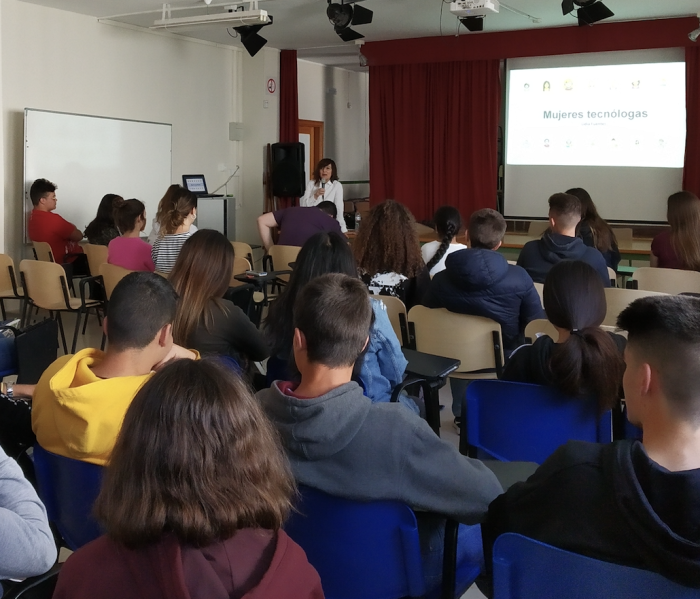 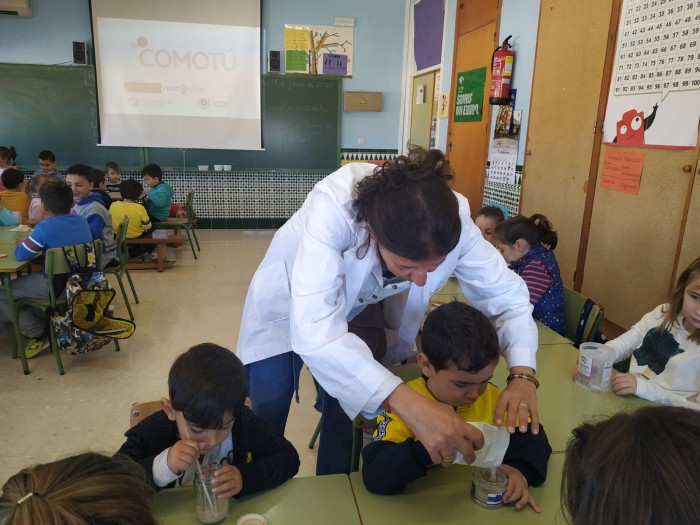 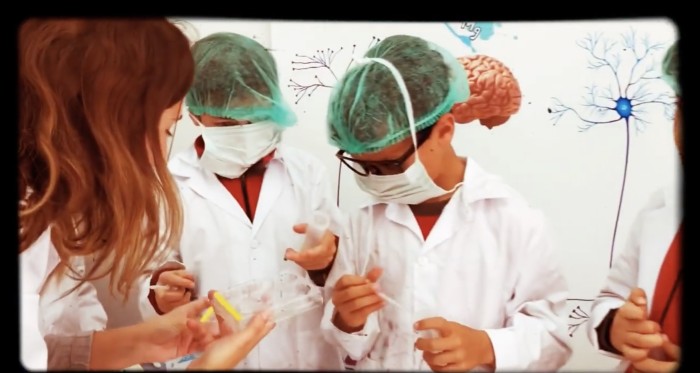 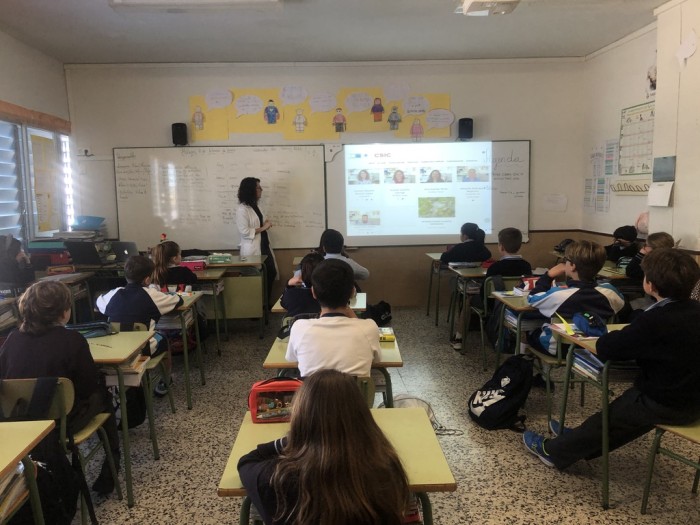 The main feature of project COMO TÚ is that it is aimed at girls and boys from an early age, when gender stereotypes and prejudices are not yet too deeply rooted.
The main goal is that boys and girls meet in person women working in any of the STEAM areas so that if, in the future, they can consider to choose a STEAM profession, if they have a vocation.

This goal is achived in the project by conducting classes and talks with different contents as listed below: 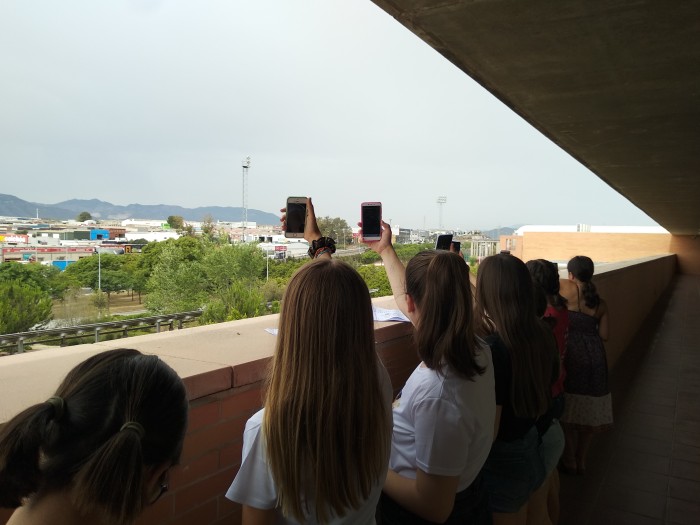 In our society, women scientists and technologists have very little visibility. The stereotypical image of scientists, mostly male, discourages girls from studying STEAM careers and, consequently, all the female talent is lost .

Gender stereotypes influence the preferences of boys and girls as young as 6 years old.

In Spain, only 15% of girls compared to 38% of boys choose to study STEAM careers, which we find worrying. In Physics or Engineering, the presence of women does not reach 30%. In fact, the current trend is downward, there are fewer and fewer scientific vocations among young people of both sexes.

It is essential that women scientists stop being invisible to society and especially to girls .

COMO TÚ is a project designed and carried out by women with the aim of ensuring that female scientists and technologists become references and inspirers of scientific and technological vocations among girls and boys from the first years of school to university. We think that if girls see the work of female researchers directly, it is possible to get them to consider the real possibility of, in the future, studying STEAM careers. In addition, it is important that boys perceive the role of women in these areas as something normal. 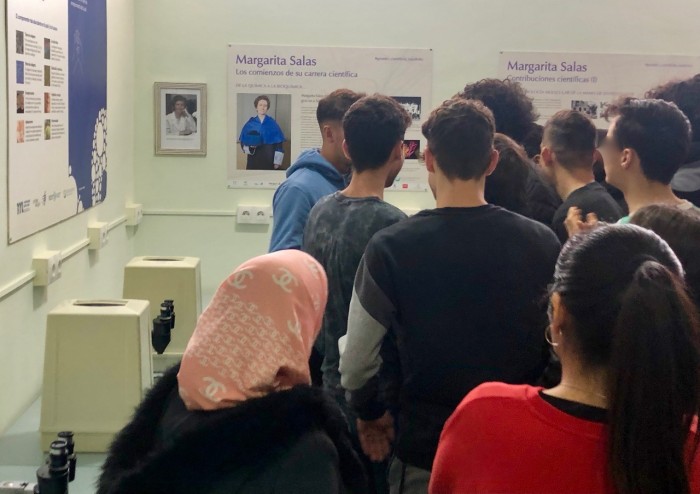 The members of this team have considerable experience in dissemination of science and, specifically, on issues related to gender equality.

Below, we summarize the curriculum vitae of these researchers:

Mª Carmen Aguayo Torres
PhD in Telecommunications Engineering, professor at the Department of Communications Engineering at the University of Malaga (UMA). Her research is focused on mobile communications, particularly 5G and the future 6G. She carries out numerous activities to promote technological vocations among girls. She has also participated in various divulgation and education initiatives in collaboration with associations, companies and schools.

Mª del Mar Gallardo Melgarejo
PhD in Computer Science, professor in the area of Computer Languages and Systems at the University of Malaga. She investigates the application of formal (mathematical) methods for the construction of reliable software. She has collaborated in science dissemination activities at the "Night of Researchers" and in the "Chronicles of the Intangible" published by the newspaper "El País". She has also participated in activities within the International Day of Women and Girls in Science.

Ana Grande Pérez
PhD in Biology, associate professor of Genetics in the Department of Cell Biology, Genetics and Physiology of the University of Malaga (UMA). She is also a researcher at the IHSM "La Mayora" (IHSM-UMA-CSIC). She investigates in the field of virus evolution and the design of new antiviral therapies. Since 2004 she has been a member of the organizing team of the scientific dissemination project "Encuentros con la Ciencia" which aims to disseminate Science and Technology to society and make women scientists in the STEAM fields visible..

PhD in Chemical Sciences and associate professor in the Department of Physical Chemistry of the University of Malaga. She investigates in the field of Raman Microscopy, SERS Spectroscopy, Atomic Force Microscopy and synthesis of metallic nanoparticles. She collaborates in numerous scientific dissemination activities as a member of the Malaga Astronomy Society (SMA), where she has carried out various scientific dissemination projects.

In addition to the quality of the organizing team in terms of gender equality, this project has the enormous privilege of being reinforced by the support of more than 70 UMA teachers belonging of STEAM areas who are willing to collaborate in teaching and giving talks with enthusiasm and motivation. 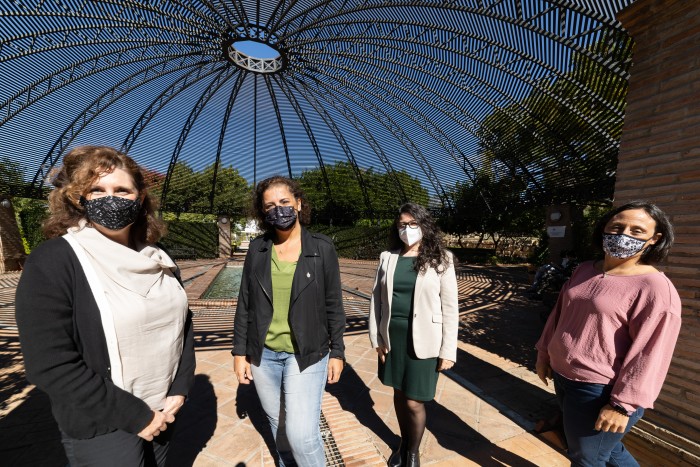 We intend to break stereotypes and make it visible the role of women in Science and Technology, contributing through education to gender equality and excellence.

The diffusion of science is a central step for the society progress. The project shows all students a model of a scientist different from the traditional cliché of the male scientist. Knowing a scientist in person may help children feel identified with scientists and technologists and improve their expectation to follow a STEAM career. Even if they do not want to study a STEAM career, we believe it is important for them to have direct women referents who have been successful in traditional male professions such as science and technology.
Clearly, this will contribute to the normalization of women in STEAM areas. A fair society does not discriminate on the basis of gender. Having scientists of both genders improves efficiency and performance since educating women in science and giving up their skills is wasteful.